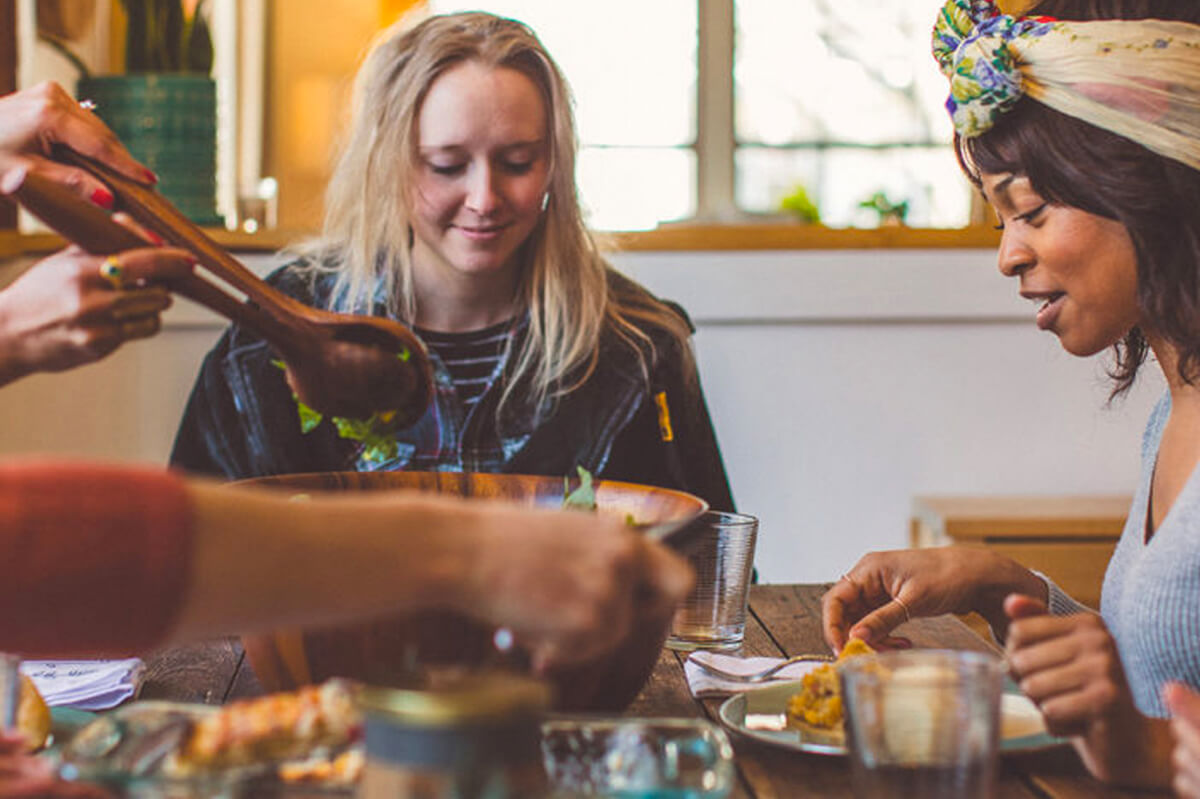 This year, we released a new book resource designed to help churches re-disciple their members around the vision of the Kingdom of God.

Written by community development practitioner Michael Rhodes and Chattanooga pastor Robby Holt, Practicing the King’s Economy explores practical ways for Christians to live out the Kingdom of God in their work, church, family, and home.

Michael recently sat down with us to talk about why he wrote Practicing the King’s Economy, why living out the Kingdom of God matters, and what he hopes the church will discover through this new book.

What motivated you to write Practicing the King’s Economy?

Michael: The motivation for the book came from my own experiences. I grew up in an affluent Christian community. After I graduated from college, I moved into a very poor neighborhood and went to work at a nonprofit called Advance Memphis.

That brought me face-to-face with the problems that materially poor people experience with unemployment, broken educational systems, and broken housing policies. I saw how an organization like Advance Memphis could really help people make substantial changes in their lives through work and entrepreneurship. It gave people a second chance.

The problem is that most people won’t take the risk to hire someone with a criminal record, or a refugee who speaks broken English, or an aspiring entrepreneur from a low-income community.

That happens in part because the church has discipled people to make as much money as they can, and give away their leftovers. People are discipled to fund soup kitchens, not to fundamentally alter the way they operate in the marketplace. But what if instead of a soup kitchen, the goal was a potluck where everybody got to bring something to the table? That would require us to practice economic justice, inclusion, and mercy in the ways we earn, spend, save, and give.

As I started looking at Scripture and different strategies for community development, I began wondering what would it look like to disciple God’s people to reorient all of their economic lives towards this potluck.

That’s really where the book started. We’re trying to communicate God’s Word in such a way that it invites people to participate—not by quitting their jobs and working at nonprofits, but by living differently where they are for the sake of God’s Kingdom.

In the introduction to the book, you describe your journey of rediscovering the Kingdom of God and what it means for everyday Christian life. How would you have described the Kingdom before that journey? What has changed?

Michael: Growing up, my vision of God’s Kingdom was that I needed a relationship with Jesus. He’d forgive me for my sins, and then my soul could go to heaven when I die.

John Perkins came and spoke at the church I went to as a kid. He taught me that the good news is that God is bringing His righteous, just, and merciful rule on Earth as it is in heaven. Getting saved does mean that we’re forgiven. But it also means that we’re restored to participate in His Kingdom by the power of His Spirit!

I think the task for the church in the twenty-first century is to really believe that Jesus is the King of Kings and that He’s bringing a good Kingdom which represents His wise, generous, and just rule over everything. The entirety of our lives is about joining that Kingdom and living as its citizens.

The book covers six “keys” to living out the Kingdom of God in daily life: the Worship Key, the Community Key, the Work Key, the Equity Key, the Creation Key, and the Rest Key.  What has been the most challenging key to practice in your own life?

Michael: Robby Holt, Brian Fikkert, and I may have some insight into what it looks like, but we’re all on a journey. Each key presents challenges in different seasons. We try things and neglect them, and we return to them.

It’s the same in my economic life. I need disciplines, rituals, and practices that help me stay on the road to becoming the person God wants me to be. It’s about following Jesus and constantly seeing where you’re failing and constantly asking for His Spirit to renew, transform, and move us to be obedient.

We know that God wants to transform our cities, neighborhoods, and communities. He wants to do things that we can’t even imagine until we get serious about doing the small things, like loving God by giving sacrificially, welcoming our neighbor in solidarity, creating work opportunities for everybody, and making more equitable communities.

You and your wife have four children. How have you tried to raise your kids to embrace the practices of the Jesus economy while living in a culture that teaches them the opposite?

Michael: As American Christians, our idolatry often shows up in the ways we don’t disciple our kids. Often as parents, we don’t really want God’s Kingdom. We’re worried that God won’t deliver the goods!

The ancient Israelites worshiped Baal as an insurance policy. They liked God, but they wanted Baal there just in case, to make sure the rain kept falling on their crops.

We’re like that sometimes! We like God, but we fall back on the American dream as our insurance policy. We want our kids to get into the right schools, get the right jobs, and make the right salaries.

My generation gets excited about living counter-culturally—and then we have kids. All of a sudden, we want them to have the very things that we’ve found so dissatisfying. “I’m miserable. I’m a workaholic. I’m greedy and self-absorbed. But I want my kids to be good at that stuff too!”

My wife and I have a deep sense that the most important thing is for our kids to fall in love with our King and with His Kingdom. We’re doing it so imperfectly. But our desire is to live and to create a home where we practice God’s Kingdom in such a way that our kids catch it.

That’s what my wife and I hope for our kids. Not that we teach them really well, but that they grow up in a family where mom and dad are bumbling along and always praying, “Your Kingdom come, Your will be done, on earth as it is in heaven.”

The book emphasizes a “potluck community” where everyone gets to contribute. What have you learned about this from your neighbors in South Memphis?

Michael: One thing that I’ve seen from my neighbors, time and again, is the courage and resilience of God’s people in the face of deep, deep oppression, injustice, and brokenness.

I’ve known our neighbor Betty for a long time. She lives in a small house, but she’s raised half the neighborhood. She’s so hospitable that her home was filled to overflowing. She set up a big tent outside her house so homeless people could sleep in it. There were already homeless people sleeping in the house—the tent was just to expand her hospitality.

In January, her house burned down. I talked to her the next day, and she said, “I’m just so grateful that everybody’s okay. God’s got a plan. God’s gonna take care of us.”

This woman is faithful, hospitable, and generous. She’s been through tremendous adversity, but she’s unflagging in her love for people and her service to God’s church.

There are a lot more stories I could tell. God has brought me into contact with so many people who have enriched my life in ways that I could not have expected. My neighbors are showing me a picture of what life would be like if we weren’t addicted to our own success and our own constant motion.

What’s the main message you want someone who reads Practicing the King’s Economy to take away from the book?

Michael: The central idea of this book is that we need to shift from a soup kitchen to a potluck.

So many of us want to help those who are economically hurting. But God wants more than that. We need to shift from thinking, “How do we help those people?” to thinking, “What does it mean to become a family around God’s table?”

If you believe in the Kingdom of God, everything must change. It confronts every aspect of our lives and calls us to greater things. It makes us think about the systemic forces that have created communities of concentrated poverty and communities of concentrated affluence. And it calls us to show the world something different through our daily lives.

If we understand that Jesus is creating a community where everyone is welcome, and everyone is an equal participant, then when we give, we will give in order to create welcome. When we share, we’ll share in ways that build solidarity.

Michael: I hope Practicing the King’s Economy invites people to think about their vocation and their life in new ways. I hope it inspires people to imagine how they could contribute to a more just, inclusive, merciful, righteous world through their day-to-day lives and their jobs—right where they are.

The church has talked a lot about dismantling the sacred/secular dichotomy. That can mean a lot of things, but when it comes to vocation, often what we really mean is that you can do your work with excellence. We can use our creativity as an investment banker or a chemist to honor Him.

“The outgrowth of that has been a shared understanding of who the poor are, what the different models are for helping them, and what our role is as a church,” says Susan Buenger, Associate for Global Mission at First Pres. “It’s helped us decide what are we going to fund, and what our strategies are going to be.”

As part of First Pres’ Wednesday evening discipleship program, Susan recently took a group of 18 people through Chalmers’ new online course, Are You a Good Neighbor?. Released in October 2017, the course is designed to help individuals and churches begin building personal relationships with low-income neighbors in their communities.

Although much of the learning in Are You a Good Neighbor? happens online, the course encourages participants to join with others and go through the material together. Susan also invited the church’s ministry partners from local organizations to participate.

The course challenged the group’s assumptions about poverty in their city. It also brought church members and the local organizations they support together in new ways. One of the most powerful moments was when the group was tasked with writing prayers of lament for the poverty in their city. As they heard one local ministry partner share his prayer of lament, the whole room was moved to tears.

“As a church, we’re interested in our local ministry partners as people,” Susan says. “They’re serving a lot, but they never get served. The course was a really healthy way for us to care for them and enhance our relationships with them.”

For more information about Are You a Good Neighbor?, visit https://areyouagoodneighbor.org